After my article on the comment left on Mountain Biking by 198, I was contacted by the crew at Breezer Bikes about doing an interview with Joe Breeze. Of course, I jumped at that opportunity and sent the questions over to Joe right away. For those of you that do not already know, Joe Breeze is one of the founding fathers of modern day mountain biking and the first to make bike frames design specifically for offroad use. 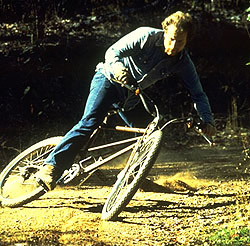 In the road-racing off-season in the early 1970s, Joe and several friends from Velo Club Tam–including Gary Fisher, Otis Guy, and Charlie Kelly–began refurbishing old balloon-tire bikes from the 1930s and ’40s and riding them off-road for fun. The old bike frames were not built for the demands of these off-road riders, who broke many old frames in their exploits. In 1977 Joe Breeze agreed to make a stronger, lighter mountain bike for Charlie Kelly. Word got out, and eight other orders quickly came in. Because he had to work out so many ideas, Joe first designed and built himself a frame, which he completed in September 1977 and immediately rode to victory at the Repack downhill time trial. He then produced nine more, building each into a complete bike, from late 1977 to June 1978. These were the first successful frames designed and built for use as mountain bikes. Joe built them up with all brand-new parts, including 12 or 18 gears depending on the buyer. They are generally considered the first modern mountain bikes. They were called Breezers.

The comment left on this site (which also sparked a lot of discussion from you guys on the article) became of interest to Joe and the crew over at Breezer because this reader made direct reference to the founding fathers of mountain biking and what they would want. Instead of guessing…let’s see what Joe has to say!

Adam writes:
I am unsubscribing because your website is just another commercial website. I am tired of commercialism; I prefer bicycles as a utilitarian vehicle, not a two – wheeled sport utility vehicle where the price of Chinese – made frames and components continually escalates. I think the founding fathers of mountain biking never wanted mountain biking to become the plaything of a small group of capitalists.

198: As one of the founders of mountain biking, it would very interesting to hear your take on the comment and where the industry has headed over the years.

Joe Breeze: (Sigh.) My take on Adam’s frustration may prove futile, but I owe Adam for this opportunity. My take is expressed in my comments further down, but here are a few thoughts:
1) I’d prefer mountain bikes to be the plaything of many capitalists worldwide, not just a small group of them. The more bikes being ridden, the more enthusiasm there is for cycling.
2) The mountain bike has served as a key steppingstone toward greater use of bicycles in America. Many people have come to realize how useful bicycles are for getting around in everyday life. In Europe, mountain biking has essentially revitalized bicycling.
3) Outsourcing: My hope was to build an American bike industry out of mountain bikes. The problem was indifference by US manufacturers. In the 1970s and 80s trying to find an American manufacturer interested in making bike stuff was a lesson in futility. “What’s the part for?” “Bicycles.” “Sorry, not interested.” They saw no future in it. Meanwhile, the Japanese were falling over themselves to get a piece of the action. Once mountain biking became popular, American manufacturers picked up interest, but it was too late. Asia was well established as the source for almost everything mountain bike.
4) Industry directions: It’s all good. More people on bikes. The overall secret is leaking out: Bikes are great in so many ways.

198: Reading over your story, it is easy to tell that you have a passion for cycling that has really defined both your professional and personal life. Do you still have that same passion and excitement for biking that you did back in the day?

198: You are known throughout the industry for making the first production mountain bikes. As you went through many generations to find the fit and structure that worked, what did you find to be the biggest hurdle in producing a bike that was built to be ridden offroad? 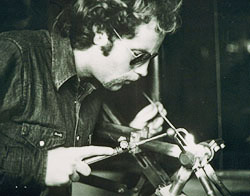 Joe Breeze: Perhaps the biggest hurdle was lack of data, as mountain bike design was uncharted territory. I took the analytical approach and did a lot of testing of the old bikes from yore (in other words, I had lots of fun!). Since 1974 I had been designing & building shorter, lighter road racing frames and made the necessary adjustments from that point. I made careful drawings. I made my Breezers with precision. I built them up with all brand new parts, which I tracked down from a wide variety of sources. I made the first 10 bikes all at once (1977 to 1978); I had no discarded generations. My first Breezers were a resounding success. They were all capable of winning Repack (which is a downhill, of course) and of being fastest up Mt. Tam as well. All survive to this day. I soon came up with my design plans for my next generation of Breezers, and shared those plans with others; I built my own next group of Breezers in 1980.

198: Mountain biking has seen a lot of changes over the past 20 years with the introduction of suspension components and bikes that can withstand the abuse that used to be reserved for dirt bikes. Over the years, what do you think was the greatest innovation in the mountain biking industry?

Joe Breeze: Your question has suspension written all over it, so I’ll choose indexed shifting. It’s been almost 24 years since Shimano Indexed Shifting hit the market and my, how we take it for granted now. Single-speeders may not agree, but then they’re riding hard-tails, no? Okay, suspension is huge! And I love choice (of gears).

198: The amount of progression in riding styles has accelerated tremendously over the past couple of years with the downhill/freeride crowd. What are your thoughts on where mountain biking is going in this category? JB: I do see irony in the most efficient vehicle ever devised—the bicycle—becoming just another way to burn fossil fuels. A bit on the order of a gas-powered turtleneck (thank you, Steve Martin). Chairlift bikes were certainly not part of my vision. Riding to the ride was, and is. Long live cross-country, or at least cross-county.  MTBRT: Traditional cross country mountain bikes have also drastically changed in the last couple of years with the introduction of the 5″ travel trail bike. Do you think this will stay the “do-it-all” bike for the average mountain biker, or is the travel going to continue to increase?

198: Switching gears a little bit, you have continued to impress the cycling industry with your commuter lineup of bicycles. For those that do not know about Breezer Bikes, can you explain a little bit on what you are trying to accomplish with the brand?

Joe Breeze: My goal is to offer useful bikes for everyday healthful getting around. Riding a fully dressed Breezer transportation bike, it becomes apparent how limiting a naked bike is—for the same reason we don’t drive cars without fenders, lights or ways to carry things. Utility is the word. In my case, my other bike is a bike (or my wife’s car). Because I crave speed I make my Breezer townies so they can GO!

198: Commuter biking is getting a lot of press lately due to increased energy costs. Do you see bike commuting increasing in the future?

Joe Breeze: Yes I do. As many people as we see riding bikes in the USA today, I see it as only 10 percent of the potential of Americans who could be riding. That is, someday bicycling in America could be 10 times more popular. It’s all to do with a bicycle’s extraordinary efficiency. That’s what puts the smile on our face: You get health while you get where you go, be it physical health, mental health, environmental health, or fiscal health. And chances are, overall, it will save you time. The biggest hurdle is ignoring the billions of dollars spent every year (for how many decades?) trying to convince us all to just drive.

198: Where do you see the commuter bike industry in the next 5 years?

Joe Breeze: It depends on how quickly the biggest secret in bicycling gets out, and the perceived cost of driving. In America, since specifically 1991, big changes have been made in how we get around. Most of it is still below the radar, but in many parts of the country a new bike path goes in here and a new bike lane there. From the grass roots to the federal level, more people all the time see bicycling as a solution, but things take time. One day, it will get to a point where the perception of landscape will flip. The average Joe will say, “Bikes, duh!” Hard to believe there was a time when people—except for those doing it—would say, “Mountain bikes will go nowhere.”

198: Where is your favorite place to ride?

Joe Breeze: The best place for me, is right out my door.

198: What bike has impressed you the most in the past year?

Joe Breeze: Most any lager in a cool glass, right after a long ride (Okanagan, Yuengling, Peroni come to mind)

198: If you hadn’t jumped into the cycling industry professionally, what do you think you would be doing now?

Joe…thank you for taking the time to answer these interview questions. You can check out Breezer Bikes entire bike lineup at BreezerBikes.com.

EPIC VIDEO – Lightfall – A Journey in...