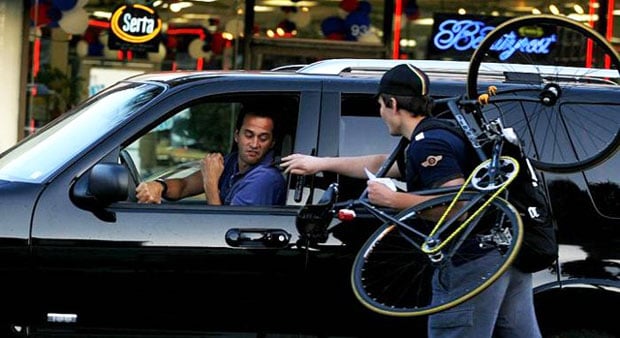 Lately, there has been a lot of press about cyclists and motorists not getting along. This shouldn’t really be any surprise as I rarely see any good news on the news but it does seem to be getting more attention as of late after some very unfortunate events. As I look at the ongoing feud be between drivers and cyclists, it really made me sit down and think a couple of things that just might help the drivers out there see our side of things. So here is the truth straight out of a cyclists mount/keyboard…

We hate asshole road bikers as much as you do

You know the type. They take up all of the road, run three wide for no reason, run stop signs and disobey other traffic laws, preach about “sharing the road” and end up attempting to own it…they throw water bottles at cars, cuss at drivers and generally look like nothing but irate assholes every time they are on a bike. Unfortunately, they are the smallest percentage of cyclists on the planet but when you encounter one…it feels like they are all that way.  This is no different than encountering a bad driver on the road that isn’t paying attention or one that goes far too slow in the fast lane. There are plenty of drivers around you that aren’t irritating assholes but at that moment…it feels like everyone is.

These irate/asshole cyclists not only give us a bad name in general, they also make the roads less safe for the rest of us by antagonizing drivers. We absolutely hate these riders as much as you do. You are not alone.

The last thing we want to be doing is competing for space with a 3,000 pound plus automobile. We already know who is going to win that fight and it is not us. That said, there are certain dangers on the road that you might not be aware of that keep us from staying all the way to the right on the road. As cars drive, they kick up gravel, rocks and other debris and push it to the side. This makes it collect on the side of the road where cars are not driving. While we could ride in that mess, the possibility of us crashing due to the junk on the road can be much more dangerous. We do not want to wash out on the road and fall in front of your car. You can’t see these gravel while driving but trust us…it is there.

When you see a cyclist riding on the white line or just to the left of it, it might not be because they want to be in your way. More than likely, it is because it is safer to ride there than all the way to the right. We want to be as far away from your car as you want to be away from us.

It is illegal to ride on sidewalks

We often hear that we should be riding on sidewalks and other off road paved paths. That is illegal and for good reason. Sidewalks are made for pedestrians and that is dangerous for anyone to ride on. It would be no different than riding a motorcycle on a sidewalk. Yes, when we were kids we probably road on sidewalks with our bikes but the reality is that it was illegal then too. But…we were kids and we weren’t averaging 20 mph on a ride.

On the same note, on the road is where we are supposed to ride.

Please try to be patient

This is the hardest thing to do (for me specifically). We drive on the road as well and know how small hangups can really make a commute frustrating. Whether it is construction on the road, a wreck or a group of cyclists…any delay can feel like an hour. We share the same frustrations while driving as well. For those of us that are not the asshole cyclists mentioned above, we try to pick roads that are not as busy during off peak times. If we can’t, we try to be super aware of our surroundings and get out of the way when we can.

The last thing we want to do is hold up traffic because we hate it when it happens to us. Please be patient and pass with care. The last thing we want to see is you rush a pass and get in a wreck or hurt a cyclist. That isn’t good for anyone. If you believe the cyclist can’t hear you, a friendly short honk often works. Many times, if you can’t see  the road ahead the cyclist will actually wave you by when it is safe.

Not all of us are bike commuters or electric car owners. A lot of us enjoy cars and driving just as much as we do bikes.

You will always win

In the world of who is bigger on the road, your vehicle will always win. From time to time, we hear “maybe they should get hit to teach them a lesson” and similar lines. That is scary and should never be said just like we shouldn’t be pulling a gun out on every driver we think is doing something wrong. It is not hard to figure out how is bringing the knife to a gun fight when it is 200 pounds vs 3,000+.

I think it is easy to forget that there is a human being piloting that car or bike. It is easy to look at something/someone as a complete object rather than a person that might have a family at home. Cycling is a sport we love just as you have hobbies/sports that you like to be a part of. We want to enjoy it and do so safely under the assumption that we have to share the same space with other moving vehicles. If you decide to take action that results in force, your life is over too…not just the cyclists.

I truly believe that the more we try to understand each other the better off we will be. Yes, there are some idiots out there that ruin it for the group. That is true of everything in life but it is also…generally…the smallest percentage of any group. The issue arises when that small percentage can be perceived as the majority.

And we’ll leave you with one of our favorite quotes that applies to a lot of things in life.

Just like all drivers are not assholes (cyclists reading this need the same quote)…the same applies to cyclists and really, if every single cyclist or every single driver you meet are the non courteous kind, you should look internally.

Chris Akrigg at it again, this time on a fat bike!!