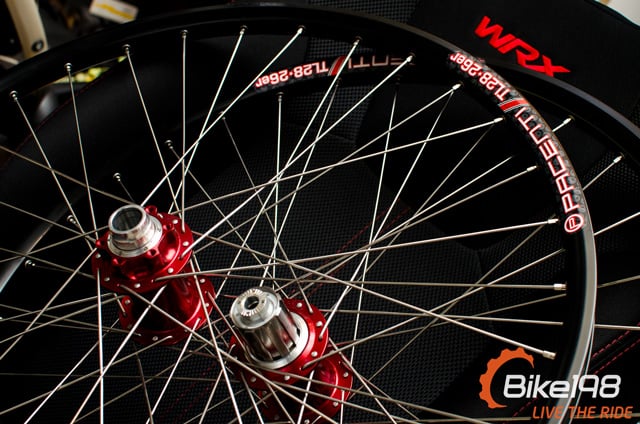 Last night, the FedEx guy dropped by to deliver the Pacenti TL28 build that we previewed a couple of weeks ago.

Chad at Red Barn Bicycles put together this build on a set of red Hadley’s and they came out INCREDIBLY well. Chad is known throughout the industry for building bulletproof wheels for a great price. He has actually built over 4 sets of wheels for me personally to date.

At a total set weight of 1,710 grams, this Hadley/Pacenti combo is actually really light for the build (10mm TA rear on 20mm TA front axle configuration). The Hadley hubs (reviewed on Bike198 here) feature 72 point engagement and rock solid construction, so they are not weight weenie hubs by any stretch. However, they are an incredible set of hubs that last a lifetime. We also noticed upon receipt that the ONLY negative thing we had to say about the Hadley hubs at the time of review has been updated and fixed! The 20mm TA front axle is no longer two end caps that like to fall off. It is a screw together, two piece axle exactly like the 15mm version now. That just moved these hubs to the top of our recommended list.

Now there is only one thing left to do. Strip down the Hadley/Stans Flow wheelset currently on the Turner 5.Spot, do a weight comparison…then get these wheels dirty.