Featured
Every Mountain Bike Should Have a Dropper Post....
Is this the beginning of end for the...
Review / Specialized SWAT Accessory System on the...
Unboxing / Met Parachute Full Face Helmet
Review: Pedaling Innovations Catalyst Flat Pedals
Inside Industry Nine – How they make mountain...
Should e-bikes be allowed on mountain biking trails?
Review / Evil Bikes / The Insurgent /...
Gear ReviewsMountain BikingReviews

The 2016 Ford F150 is probably the worst truck to review this pad from Race Face on. Out of all of the trucks on the market, the 2015 – present F150’s has the BIGGEST bulge at the top of the tailgate out of any trucks currently on the market.

While this is a growing trend in truck design, the F150 is by far the worst in this aspect. I don’t know how much stuff they stuffed in there…but there is a functional/full pull out step with handle, rear view camera, back up camera for the trailer assist and who else knows what they shoved in there. At least my son really likes the step in to the tailgate and I can drop it with a push of a button on my key FOB.

Why does this matter? Because it greatly effects the fit of the pad. Ideally, any tailgate pad (regardless of manufacturer) really needs a flat tailgate, like the ones found on Tacoma’s, or at least a small bulge where the handle for the tailgate resides. 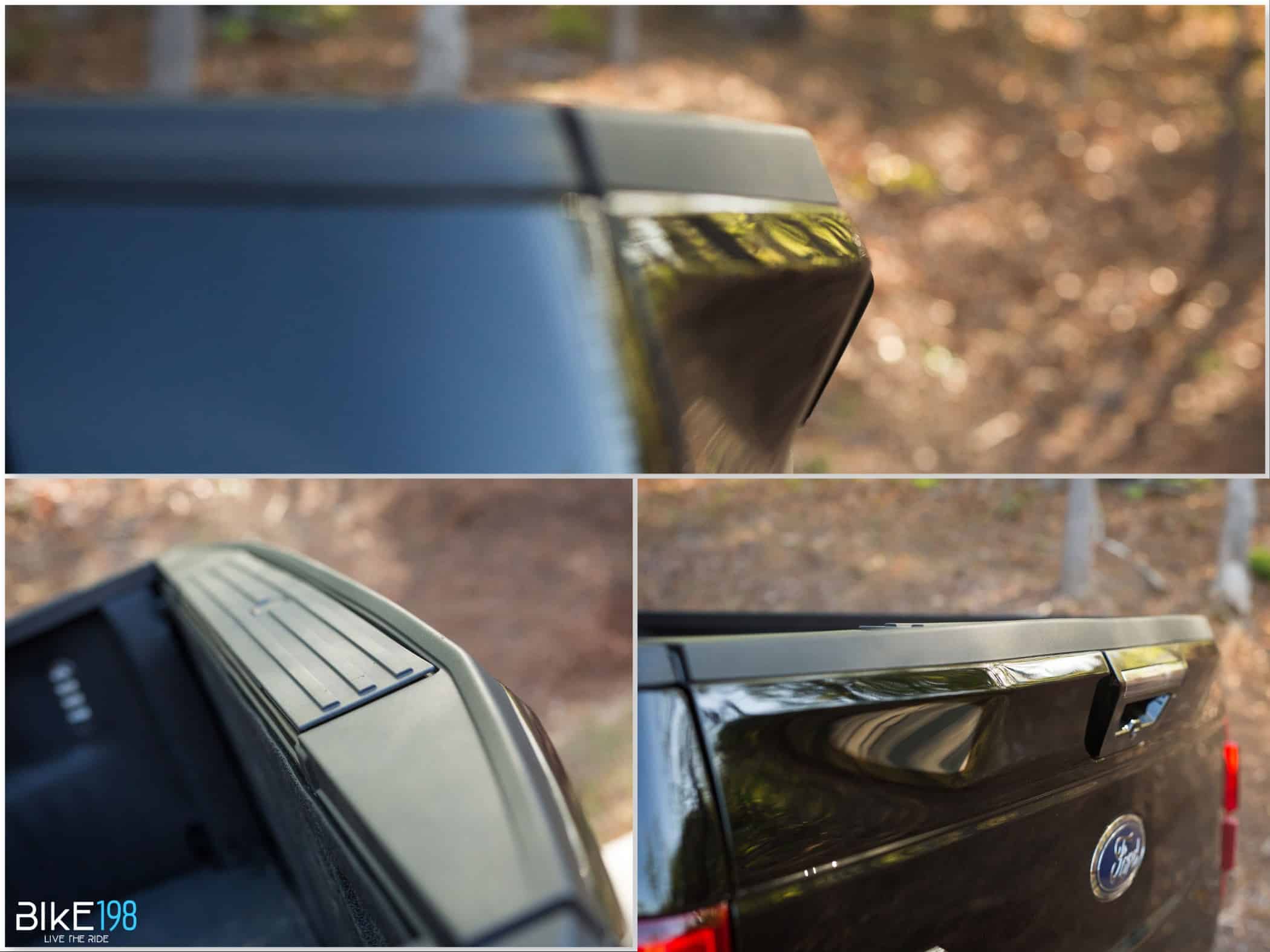 Now that we have that out of the way…please try to keep that in mind as we move forward. 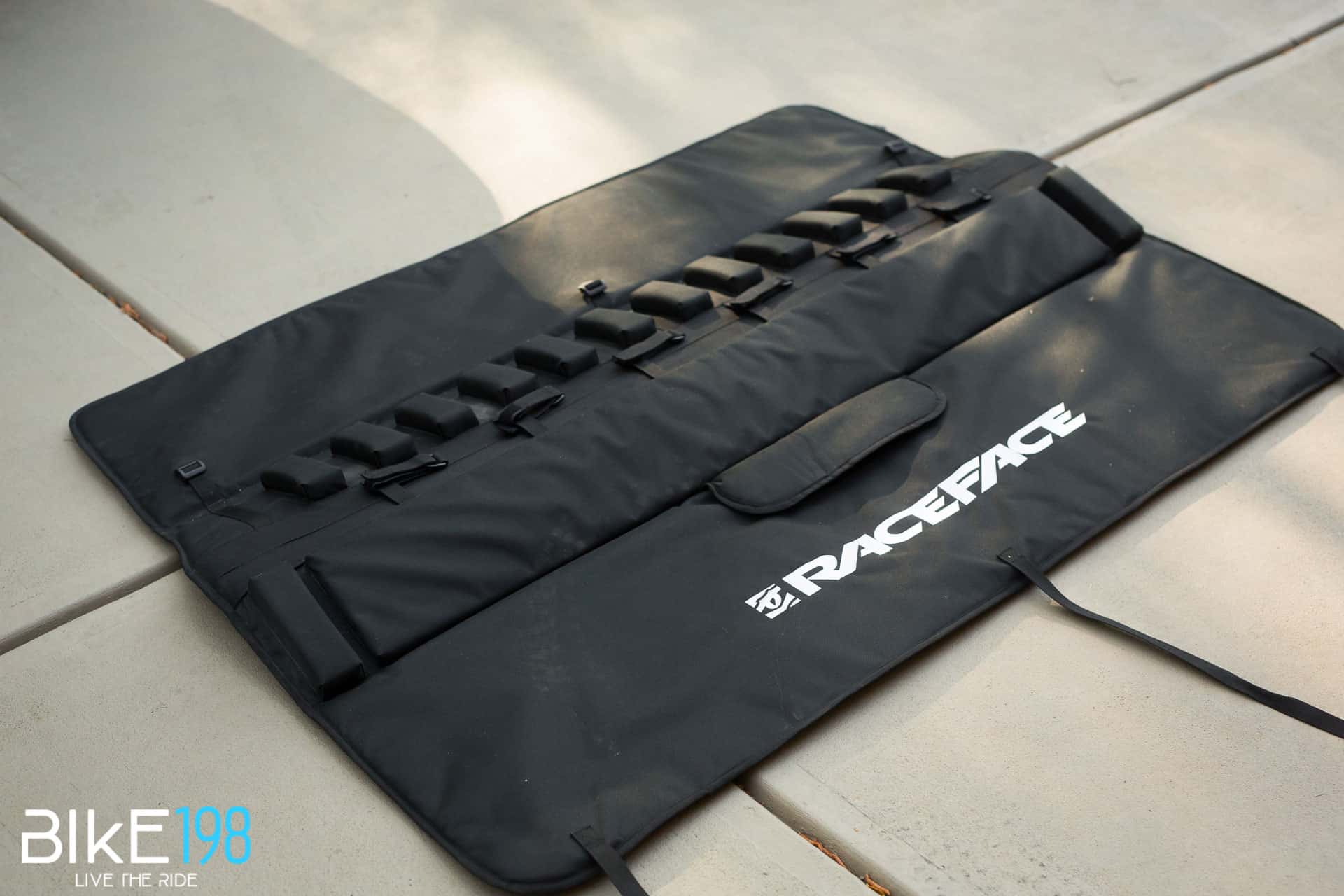 There are two Race Face tailgate pads. There is the small (57″) and the large (61″). One thing that people don’t realize as well is that the small pad actually has raised blocks for more fork protection. I think this actually has more to do with the thickness of the smaller tailgates so there is a need to take up more space to keep them more secure. This large pad as a consistent, single run pad on the outside where the fork resides. Does the small provide more protection? I’m not sure as I didn’t have one to test but I can say that I had no issues with the large in that aspect. 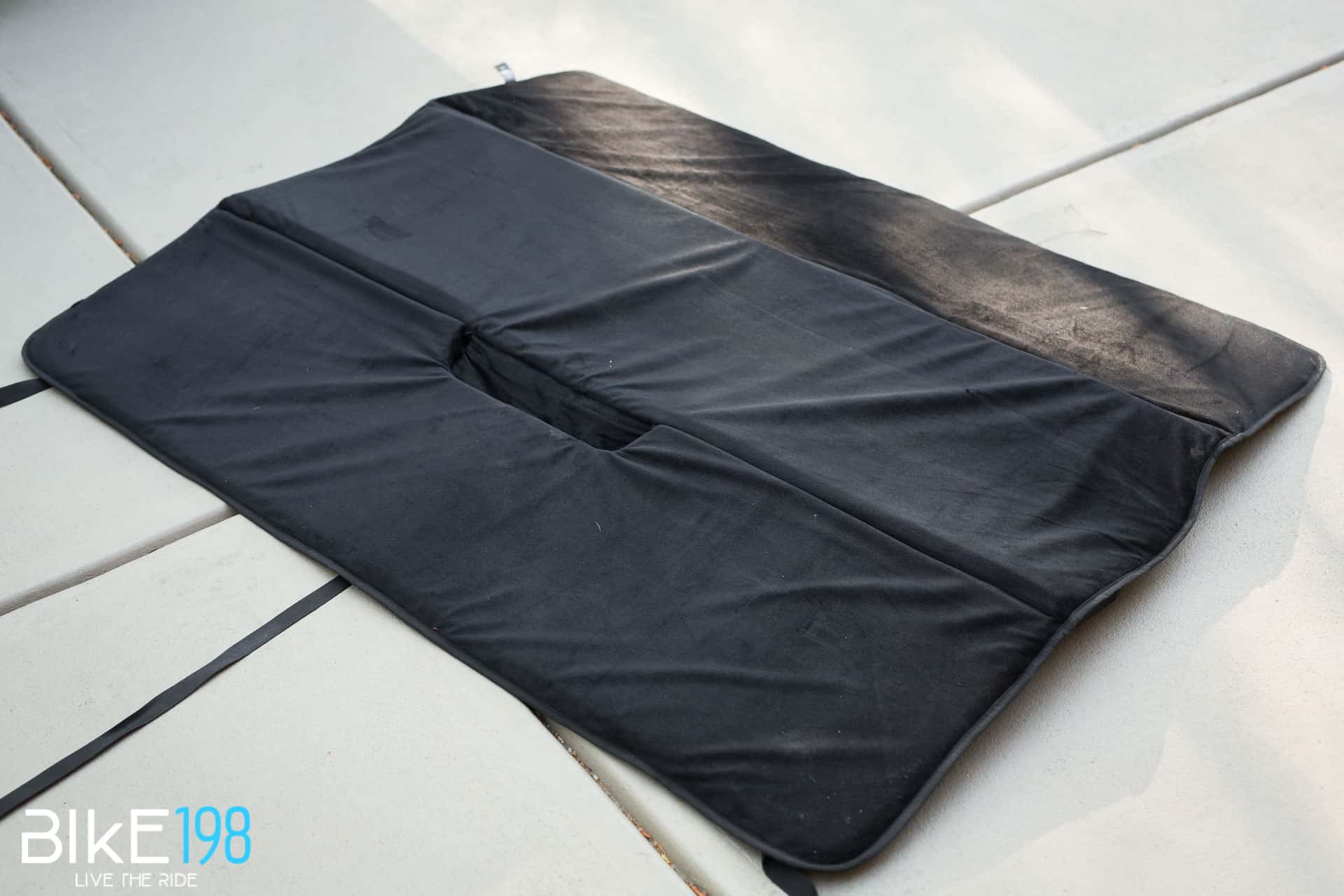 On the backside of the pad there is a felt liner and you can also see the opening for the latch access. The pad installs easily on the tailgate just like every other pad on the market. All you have to do is fish the nylon straps through the bottom of the tailgate and snug everything tight. It’s straight forward, secure and the same across all pads on the market. 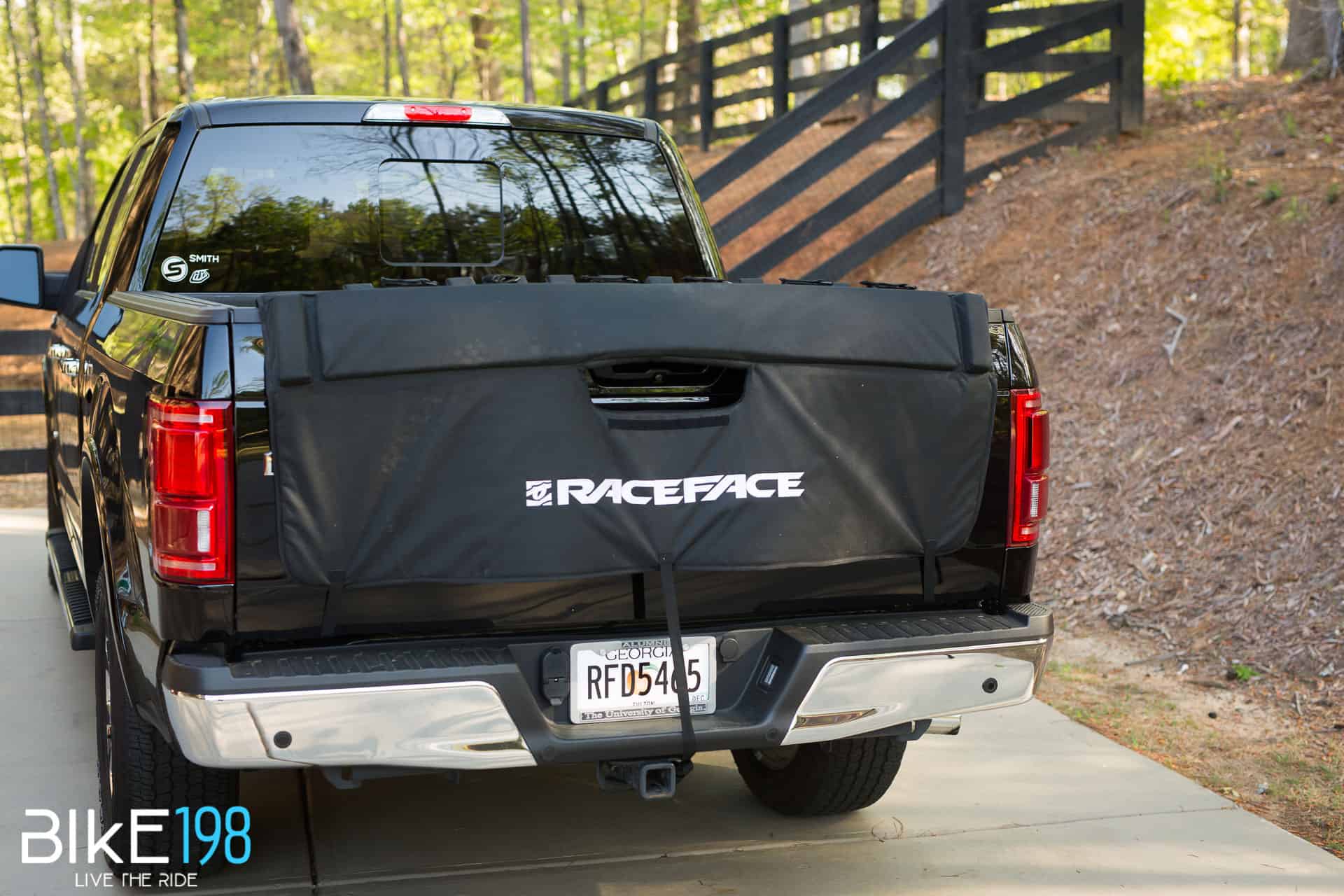 Once installed, you can flip the handle access flap up to allow for any sensors or backup cameras to function as normal.

To hold the bikes in place, there are pads that the downtube of the bike cradles in with a nylon strap to secure the bike in place. After that the wheel just sits easily sideways and the rest of the bike rests in the bed of the truck. You can fit a total of 6 bikes on the pad. 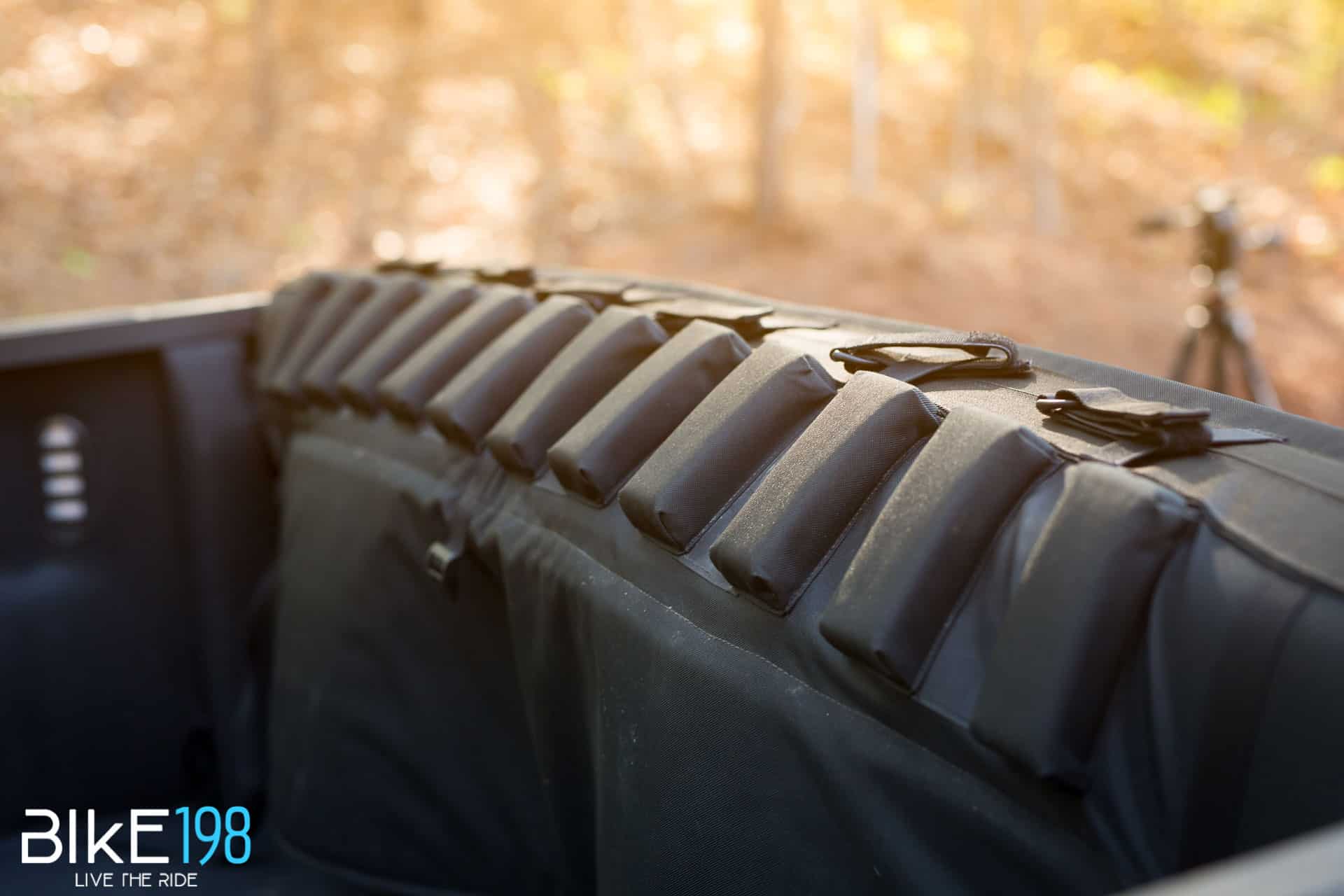 This is the point that you can see the fitment issues that come because of the shape of the F150 tailgate. The pad does not rest on the tailgate and instead creates two large waves on both the front and the back of the pad. I found that if I tied the center tie off to the hitch, it got rid of some of that on the outside but it was still really present on the inside. Eventually, I might try installing a strap on each side on the bottom to pull the pad straight. While it wouldn’t sit flat, at least it would be straight.

Before we get into how the pad performed as a bike rack, here are some additional stats from Race Face.

Tailgate pads have been around for a long time (also known as a heavy blanket back in the day). They provide the convenience of a lot of bike storage, light weight and easy unloading and loading. The actual structure of the Race Face pad provides one of the more secure mounts for the bike than others I have tried in the past. The down tube cradle pads combined with the nylon straps really kept the bike secure. The only time I even ran into a slight issue was when a friend of mine and I were essentially having a drift competition on a rough gravel fire road. Even then…the bike shifted but stayed secure. 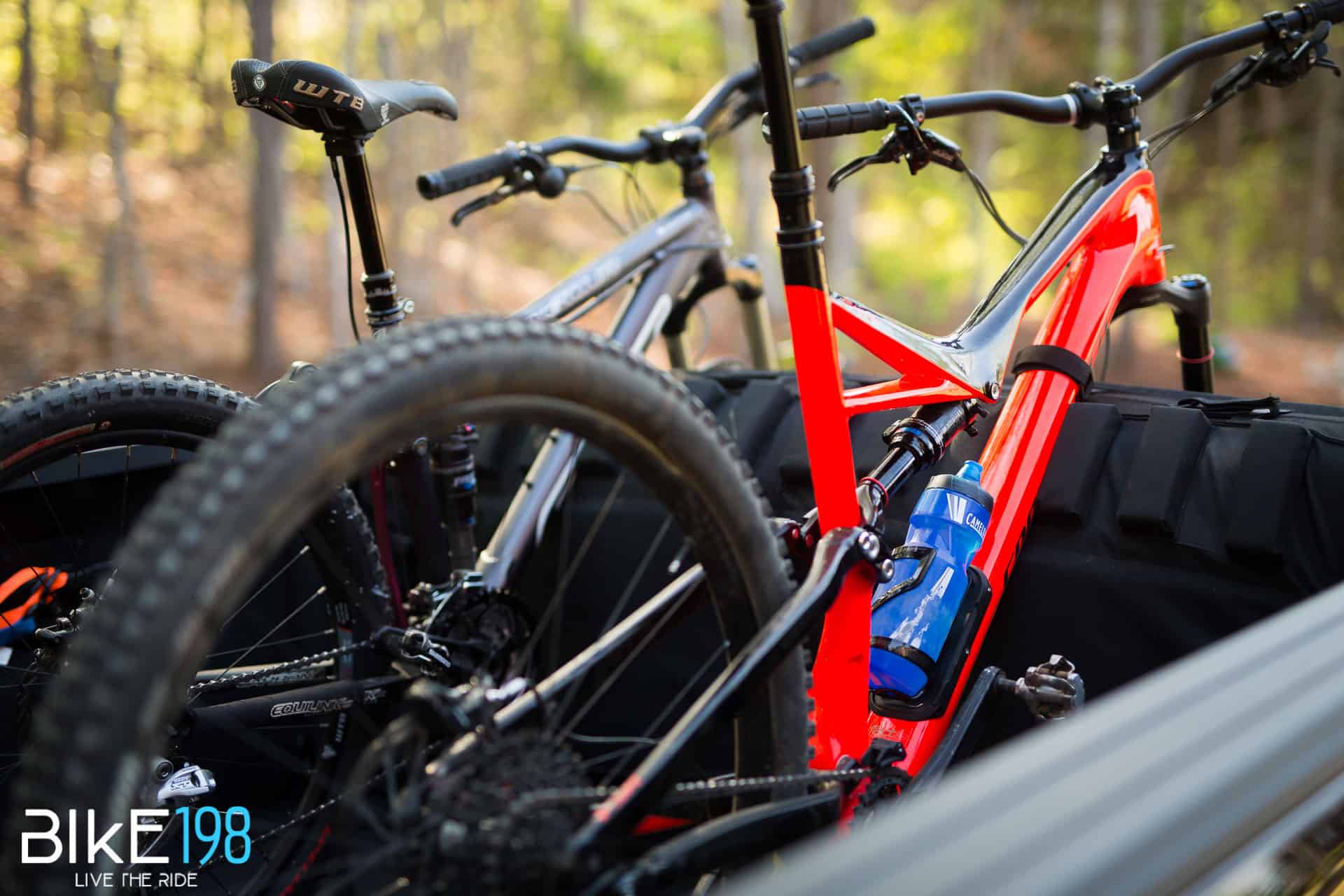 The main worry among mountain bikers with tailgate pads is damage to the bike or your truck. I can be a little bit picky (ok…a lot) about my bikes so I always made sure the down tube of the bikes was wiped clean before racking them. If there is mud/dirt on the contact point with the pad, you are going to scratch your bike. Nothing loves to ruin surfaces more than thick dirt and friction. The backside of the pad is very soft so it is pretty safe for paint. Again, if you have dirt in between the surfaces, there is a possibility of scratching. A good coat of wax and some common sense usually takes care of that. The design of the F150 tailgate did actually do one thing well which was keep the pad off the paint. I guess the weird looks did help one aspect. 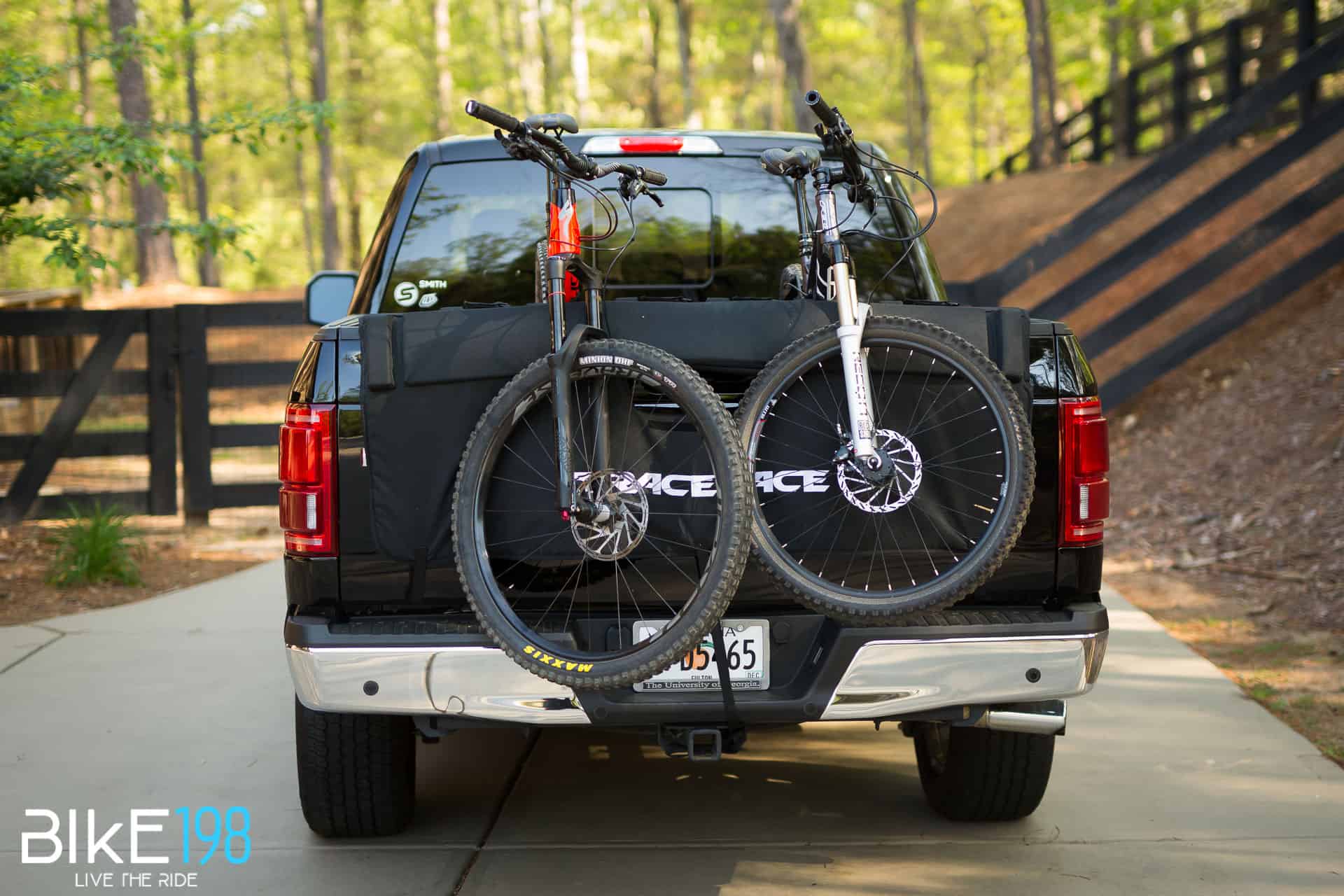 Loading and unloading the bikes is straight forward and quick (as you can see in the video at the title). However, if you are shorter in height or your truck is lifted, it could be harder to get the bikes racked and un-racked than a conventional hitch rack.

One issue that can be a big one for a lot of riders is security. While you can lock the bikes to a secure location in the bed, you are leaving your front wheel just hanging out there without any real way to secure it outside of using a second cable lock if you have one. 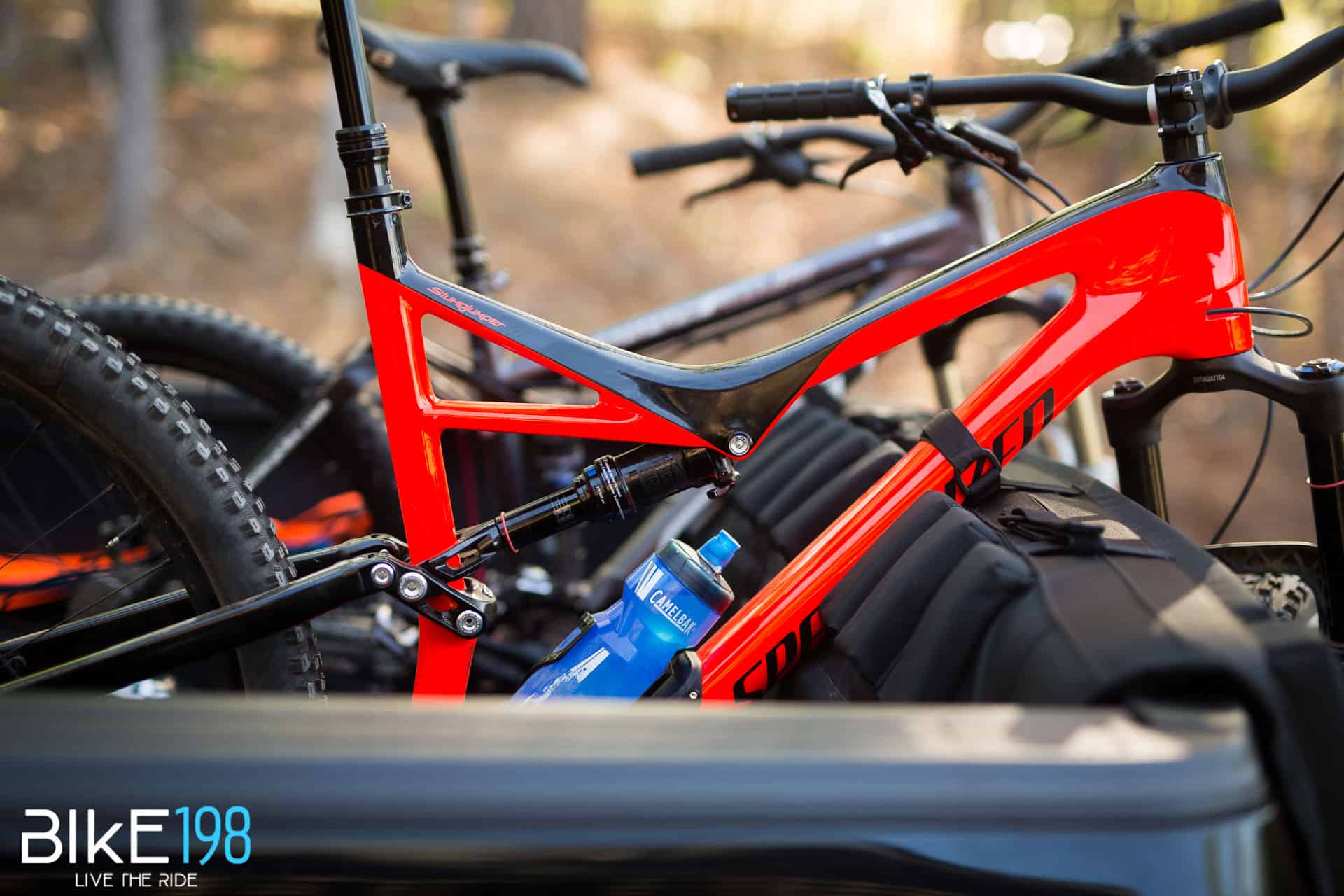 Wrapping it up on the Race Face Tailgate Pad

I find myself using the tailgate pad a lot. It handles a lot of bikes without increasing the length of the truck and I can even store it under the rear seat if needed. I haven’t had any real issues with the design of the Race Face pad and actually find it better than most others on the market at keeping the bikes in place even on the worst roads. There really isn’t any way for pad designers to design around every tailgate shape so I’ll leave that criticism for Ford.

If you are looking for an easy, inexpensive solution for racking your bikes in the truck bed, I would recommend giving the Race Face pad a first look. The padding is thicker and it seems to have more design elements to it than other pads on the market.

Race Face Tailgate Pad - Size Large Review
The Good
Lightweight, inexpensive option for transporting a lot of bikes
Thought put into design that makes for a very secure mount
Quality construction with felt inner liner
You can keep latch access open for access to rear view camera
The Bad
Possible to scratch bike or truck if you don't clean surfaces
Doesn't work well with thick tailgates like the F150
If you are shorter or the truck is lifted, bike loading and unloading could be difficult
8
198 Review
Buy Here
JensonUSAAmazon.com
bike rackrace facetailgate pad
0 comment

Creative Racking: How To Carry A Road Bike...

Race Face Brought Back To Life By A...

Race Face Is Closed: The Shot Heard Around...