At 153mm of rear travel, the Slayer SXC 70 trail bike rounds out the all mountain classification for Rocky Mountain Bicycles. With tech vocab like Form Technology and LC2R, Rocky Mountain promises to deliver an outstanding performer for the 6″ travel crowd that holds true to the ideals that RM has held to since the early ’80’s. Over the past couple of months, we have really put the hammer down on this flow sled from Rocky Mountain, so how did it perform on the trail? 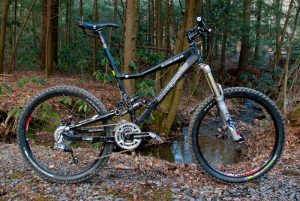 As you can see by the spec list on Rocky Mountain’s website, the Slayer SXC 70 comes equipped with some of the industries best components. You will find everything from Avid Elixir CR’s to quality Easton components. SRAM X.9 triggers and rear derailleur round out the options as you click into a set of Race Face Atlas cranks. The Fox Talas 36 R controls the front end of the bikes while a custom tuned Fox DHX 4.0 handles the rear end duties.

All of these components are put through the trail by a set of Shimano XT/Mavic XM317 wheels. Unfortunately…as with most off the shelf builds…the wheelset is rather cheap and does not match the quality of the rest of the build. This is not something that is unique to this bike as most of the builds you will find out of the box come equipped the exact same way. One day…hopefully…bike manufacturers will take note and start to offer better wheelsets for their top end mountain bikes. In this case, I swapped out the wheelset for our test Hadley/Notubes.com Flow wheelset to really get the trail feel of this ride. While some of you may disagree with this decision, I felt it was in the best interest of the review on the bike and how it acts on the trail as the wheelset can make or break the feeling of a mountain bike.

The overall build quality on the Rocky Mountain Slayer frame is what you would expect out of a Canada based mountain bike manufacture that has been around since the beginning. The high quality Form tubing is mated together with even, beaded welds. With an MSRP of around $2,000 and this complete build going for around $4,100, you get the build quality that we have come to expect out of bikes in that price range.

The chainstays on the Rocky Mountain Slayer SXC70 are a single molded carbon fiber unit that may excite or put off certain riders. In our tests, we had zero creaking or durability issues out of the rear end of this bike, but we did start to notice some scratching around the tire of the clear coat. This damage is purely cosmetic with zero affect on the performance of this bike.

The LC2R linkage is a unique design that has a lot of positive trail aspects that I will get into shortly, but it does create to issues when trying to work on the Slayer.

The Rocky Mountain Slayer on the Trail

Now that the bike is up and running, it was time to really hammer it out on the trail to see how this mountain bike rode. 6″ travel mountain bikes are designed to take abuse. Typically, they weight in the low to mid 30 lbs. range and are fantastic single track downhillers while giving up some of the climbing efficiency that you find in a 140mm/5.5″ travel, high 20’s rig.

Descending on the Slayer SXC 70 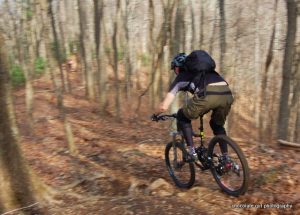 The Rocky Mountain Slayer SXC 70 absolutely rips on the downhills. The slacker angles and longer wheelbase (even more than most 6″ travel rides) makes the bike incredibly stable through obstacles and technical sections. The bike basically begs you to just let off the brakes and let it work.

The LC2R suspension design has a very low center of gravity that helps with the stability and cornering ability. As you go through the suspension’s travel, the axle path seems to rise above the bikes center making it just want to rail bermed turns. As you slam the rear suspension into the ground, it just gains more traction and pushes your forward. The faster you shred down the hill, the more comfortable the bike becomes as it stays plush through the small hits and soaks up the big hits with an almost bottomless feeling. For drops up to 4-5 ft. to flat, I didn’t notice a single harsh bottom out while riding. This says a lot for a suspension design that is as plush as the Slayer’s LC2R.

The rear end of the Slayer stays planted and holds a line with ease. There was no noticeable rear end flexing as we continued to try to find the limits of this rig. At first, I was worried that the carbon stays would prove to be a weak point in this frame, but…to my surprise…they held up beautifully. When you get into hard braking into the corners, the Slayer’s suspension stayed active and planted to the ground. While some single pivot designs are known to stiffen up under braking, the Slayer held its own as you went from balls out to a stop on tight switchbacks.

If you are really wanting to push the limits on the Slayer SXC 70, I would drop the stock WTB tires in favor of some rubber with more meat. During our test period, we mounted up a Kenda Telonix rear matched with a Kenda Excavator front tire. This combo, while larger and heavier, seemed to be a better match for the Slayer’s capabilities.

One weak point of this frame is the Fox DHX-a 4.0. While it held up during small and large hits, it had a hard time keeping up with the active LC2R suspension during midstroke. This is not the first time I have run into this issue as I have experienced this on other linkages with the 4.0. It almost seems to lose some of its control once you are about mid-travel. To really let this frame loose, I would want to throw a coil shock on and see how it performed. In my opinion, the ride characteristics of the Slayer are perfectly suited for a coil platform.

Also, as you enter sections of trail with tight turns around trees and other natural obstacles, the longer wheelbase is a little harder to navigate than some other 6″ travel rigs. You will notice the slower turning radius as you try to flip the bike back and forth on tight singletrack, but once it opens up again…you are gone.

Climbing on the Slayer SXC 70

My normal climbing position on any 6″ travel, all mountain bike is more of an upright position than you will find on more xc oriented bikes. I rely on the increased traction and granny gear to slowly pull me up the mountain side to the next long downhill. The Slayer SXC 70 sits in and climbs beautifully. The active rear end of the Slayer keeps the rear tire glued to the ground as you navigate technical climbing areas. With the ProPedal engaged on the Fox DHX 4.0, you are able to control your pedal induced suspension feedback while still keeping the frame active. When you stand up and hammer on the Slayer, you do get more of this pedal feedback so it is better to sit and spin. The longer wheelbase and slacker angles make for a stable climber but you are not going to be the first one to the top. As you get into more tight turning during your climbs, it is going to take more effort to get the Slayer around due to the longer wheelbase, but if you keep your weight centered…it can be done.

Overall, the Slayer climbs ok for a 6″ travel mountain bike. It gets the job done but it is going to be a little bit slower than you might be used to. The aspects of this ride that make it such a blast going down…play against it when you start going up.

Overall Thoughts on the Slayer SXC 70

The Rocky Mountain Slayer can best be described as a Canada flow bike. It is built for fast, technical filled downhill runs that you have to pedal for forever to get to. While it is not going to be the fastest 6″ travel climber you have ever ridden, it will be one of the fastest when things get pointed down. There are several aspects of the frame designed that can be an issue (interrupted seat tube, boost valve and front derailleur bolt accessibility), but I can see any way of fixing those issues and still keeping the feel this bike has on the trail. The LC2R linkage rails when pushed to the limit…just remember to keep your hands off the brakes and enjoy the ride.

If you are a rider that is looking for a 6″ travel bike that will downhill with some of the industries best, this may be the ride for you. The Rocky Mountain Slayer SXC 70 delivers a high preforming ride with quality construction at a middle of the road price. I was sorry to have to give this bike back to the crew at RM… 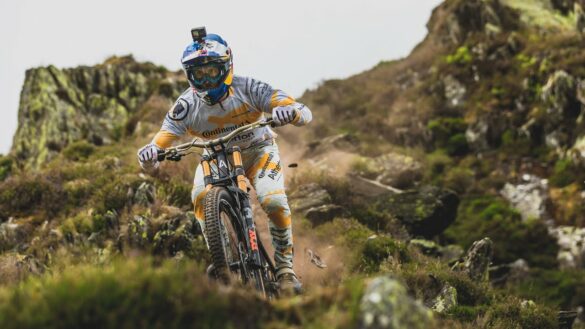 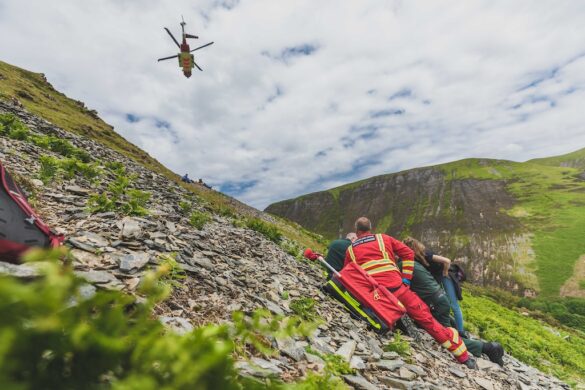 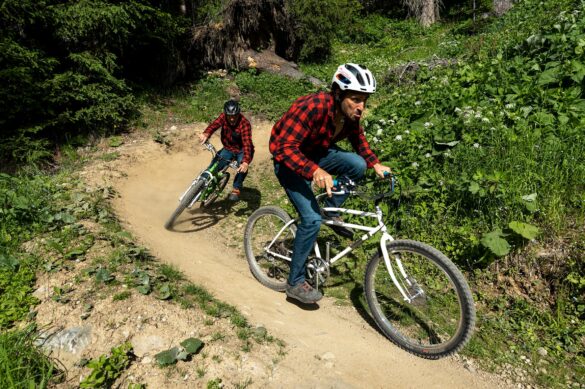 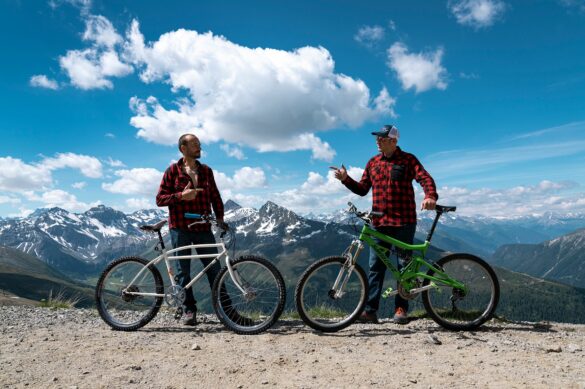 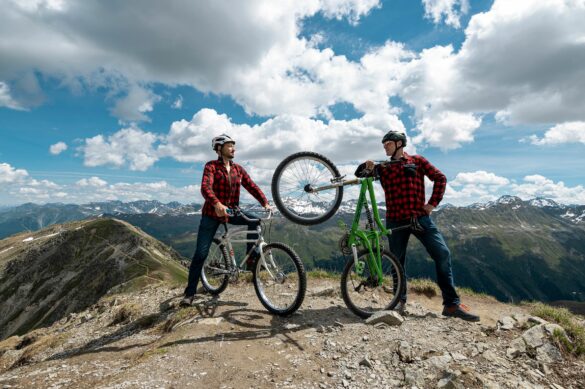 Hi: I am from Cabo in Mexico and I need to buy some parts (rear suspension) of the Rocky Mountain Slayer SXC 70. Can you sell me the parts?
Regards
Oscar Margáin

There are more kids on bikes right now…and...